Miracles Occur in the Largest Places, the Smallest Places, in All Places.

“The world is held together by things you can’t see.”  – Miracle on 34th Street.

Location is a crazy thing.  Especially today.  With so many advances on traveling, location has become not an obstacle, except to the individual.  It is difficult for one to find their mind, heart, and experiences to be transferred to a different location when you find you mind, heart, and experiences settled in one area for a specific time.  Relocating these aspects is not always the easiest – but in seeing my first school production since leaving Mexico, and going to see Miracle on 34th Street at Woodbridge High, I was a little nervous.  I have always loved/preferred slipping in a production trying to be unnoticed and absorbing all that would be part of a student production, as if never seeing it before or knowing anything or anyone tied to the production.  Sometimes over several nights, to take in the full feeling of a production without anything else to occur.  On a very -not-used-to-the-winter-cold-evening, we head to see Miracle on 34th Street – the actual second show since last nights’ was cancelled due to the winter weather.

When I was sitting in the auditorium, I took in the feel around of all the families of the area, gathered together, catching conversations of winter traveling from productions, church gatherings, family get-togethers, and more, part of the warmth as you began to hear the musicians tune up is the smiles, nods, and conversations initiated with me, many who I do not even know but felt so at ease to give me recommendations on alternatives from services on local cable, internet, and phone options.  Finally, the recording comes on letting the audience know the show is about to begin.  it is highly comforting to see rows of familiar students fill the seats to see their friends on stage.

There is alot to take in for me on an individual scale having witnessed so many productions when the ASF Fine Arts Center opened for the first time in Mexico City, 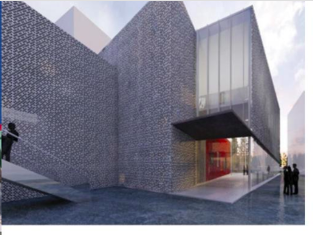 (remember, before seats were installed where that folding chair collapsed from under me?!!!) – there were so many amazing memories ranging from Beauty and the Beast to the Radium Girls, slide shows of productions and the personal aspects that tied myself to each of those on stage, behind stage, in the booth, and more flashed through my mind as I began to see a story of a large town, represented by a small town, in keeping the real spirit of Christmas.

There is a TON of aspects to pull out of this second night production, none of the below being anything to miss:

The Macy’s scenery/toy props, Christmas extras were awesome and gave you the feel of a Christmas that comes to you.

Susan Walker, played by Alyssa Anthony, was a total standout.  From her first finger jerk to indicate where she lived, to her youth-like enthusiasm and believable energy seems to be an indication of looking for her in the future in to come productions.

Doris Walker played by Holly Todd, played the on top of everything individual, independent and built to be that way for her daughter to the T.  I found it just so earth shattering to always see her during the day as a member of the ROTC, and seeing her perform on stage and make a transformation slowly towards Christmas spirit.

Fred Galley, played by Jacob Zanovic, did contain the right amount of self-confidence, pushing back and forth, and arguing between himself and others, he slowly becomes more and more in character as the production progresses.   His insistence and growing into a lawyer, along with a more self-style of awareness  of Doris, and his sincere connection with Susan Walker, is contagious.  Well Played Jacob!

Kris Kringle played by Steven Lord worked,  It worked well, Yes, part of the time you see Kris’ moustache dangling, his cap trialing behind (remnants of what you will remember in the film)  AND proving the point he is the real =Kris Kringle with having his beard pulled as a real test (lol), and seeing how he carried his Santa Claus image across stage when accused and on the defensive, as well as playing the enforces of all things holiday.  Betting on the role of Christmas and his ability to carry it out is felt even stronger as you near the conclusion of this magic story.

Marvin Shellhammer played by Alexander Strain, did his best survival role for Macy’s, from plastic alligators, to falling in line behind Mr. Macy, and Doris Walker, to being a doubter, to follower of Kris Kringle, to sometimes a klutz and persona of mishap, Alexander does manage to bring the attention from himself to Kris Kringle.  While some moments were hard to hear Alexander, he became more distinct as the production went on and represented a personality of his own.

R.H.Macy played by Kaleb Parson gets excitable, angry, mad, and nostalgic in the right places.  His insistence and representation of the icon of this production was well played, and his ability to transfer himself to many roles throughout is a small peek into the commitment all the cast played in so many diverse roles.

The cast as a whole –

made sure they put their all into every scene, be it they way they smiled, changed in a variety of attire within minutes, to sending out the right body language to capture the highs and lows of many emotions of wonder and nostalgia, to representing a variety of musical scores, you received the absolute message of what this was all about, what the holiday spirit should  be, and does represent.  This was done so well, you tend to forget the specific lines and actions that help you have each individual on stage stand out.  With the proper enthusiasm and energy as the whole cast displayed, it is easy to see how successful this was due to the contributions of everyone as a whole cast.  Never once can anyone take for granted the magic of a small town, of a Christmas feel, of a place that exudes what Christmas should be all about.

The Young Cast was G R E A T and amazing as well.  The Christmas spirit as represented by the cast chosen was very well done, and from the beginning seeing the parts of the Macy Parade, to actually sitting on Santa’s lap, to actually being called up to testify in court, they nailed anything you’d want to know or feel about the Christmas spirit.

Much of the success of a production also goes into what does not happen on the stage.  In this case, hearing the details that go into a very long preparation period, from students that would pass through the Media Center, to students who wanted to just talk about how late practices would need to go amid balancing research papers due, other assignments, as well as the time needed to detail out scenery right up t the very first night, I realized as a former stage crew hand how often even with the best planning every single minute leading up to the play is consumer, but worth discussing with others to show how committed, proud, and tied individuals in the production become to the process.   This was no exception.  Despite a cancellation due to bad weather Friday, the show must go on and it does.

A highlight addition is the ability to have milk and cookies following December 17th’s production, and wow.  You need to see the lobby of the WHS – talk about a surprise view.  The view and ability to see the WHS decked out and spruced up for Christmas is amazing, AND being able to see Santa, have milk and cookies with Santa following? – It is magical and worth that as well, let alone the show.  Adding a portion to a production that gives back to the community in other ways to, for at least one show, is an amazing idea and could be tied to every post – show plan, but this is obviously perfect-timing with the holidays.

Down to the program you receive (I love the feel of the program, crazy, right?!), care and meticulous attention to what the holidays should represent, despite what the world brings to your doorstep, is expressed and tended to.  That is a powerful feat to handle and put out when it comes to a tumultuous 2017 year.  Yet, the power of what individuals can do, the influence they can make, when called upon, is evident from a production, out on from the heart, such as A Miracle of 34th Street.  It is NOT a miracle that this production comes together for these shows and one last showing today, December 17th at 2 PM at Woodbridge High School, but is warming and still instills a belief in miracles when you are able to capture a bit of the holiday spirit thanks to this production.  That miracle still exists thanks to participants, ranging from the staff, families, and individuals that offered their time to allow this to occur.

Ms. Workman and Ms. Jones have done, again, a super job of making sure all within reach have something to share with another, take with them a piece, and hold close, what a holiday can mean to anyone, in any situation, with or without alot of “things” around the holiday. The cast reinforce the idea that the idea of a holiday, of a dream, is within everyone’s reach, that is what changes things, the idea within each of us, and those of us that can make a difference, realizing that dreaming and doing are in fact separate entities, and the action spurs on those that can’t until they are able to.  There is much potential in those possibilities, and you realize all of this in a classic tale of spirit in WHS’s Miracle on 34th Street.

Location is a crazy thing, but powerful when it occurs in a small town, as well as in your mind, heart, and whole being.  Don’t miss the last show on December 17th to share in the magic of a classic production, and the opportunity to share this spirit afterwards with the classic icons and spirit in the lobby of WHS!