VERY few times do you get a chance to see something for the first time, especially in a world where the speed of EVERYTHING, allows you to multitask and speed up your life, and yes, accomplish MANY things at one time.  Yet, when the opportunity comes along to experience something unique, the first of its kind, EVER, is that worth passing up – not usually.

For the first time ever, you get the privilege of seeing a production, written by one of our own ASF staffs, score, set, ALL OF IT, never seen before, originally made for ASF, and featuring ASF cast and contributions BY THAT SAME ASF cast, in a production NEVER seen or heard before, and with the option of other schools obtaining the right to put this production on.  How often do you get a chance to do THAT?

Walking on the stage for the first time, the first thing I noticed was the modern look to this production, islands of sound equipment on left stage, right stage, in the audience, this was truly like nothing seen before.  Then it hits you, the risks that the staff in the orchestra, on the tech staff, on the cast, the directors, sponsors, costumes, the set, the risk that everyone was taking on something that has never been done or accomplished before?  THAT ALONE is a curiosity that simply will not stop itching.  We have a contest right now, EASY, to allow you to be a part of this production: 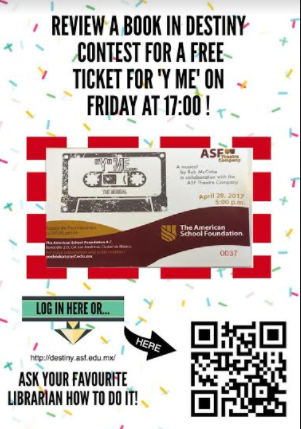 I do not want to be the one to be the one that says, “I wish I would have seen that at some point, because, this is truly history in the making, with a whole lot of courage on many fronts and backs (stage that is).  I am so excited for this opportunity that has been laid before us at ASF, especially after hearing the score, “Forbidden Love” at the Grade Level meetings, and you have to wonder – how does one like Rob McCabe have this whole idea, come to fruition, for an ASF production?  I am as excited as ever to see that answer starting tomorrow night.  DO NOT be the one in the aftermath of this exciting adventure asking, “Y Me?” on the wrong side of this production!