What Would Your Soundtrack Be?

It’s funny how particular comments stick with you and linger.  Ever since I started a blog, I have found so many avenues of thought, experiences, and moments that linger behind me, and urge me to bring them out.  Many times I do not even realize how important they are and I just find myself putting them down in a blog, and from somewhere, I  have not figured out where yet, a story comes.  That to me is inspiring and everything I would want to happen with writing that has been denied to me due to a lack of allowing time previously for events around me to soak in – and allowing myself to write about it and contemplate.  Writing is powerful and should be allowed to envelope people, and in a world that is so fast-paced, a lot of the simpler things in life slip away so easily – and that has been the gift I have received in coming to Mexico – learning to allow those moments to seep in and shape my writing.

One particular comment still haunts me as as have moved past seeing an amazing film, Unbroken, comments from two individuals in the theatre.  As we were halfway through the movie and the amazing and yes, horrible conditions that Louis Zamperini survived  – the comment of two movie-watchers beside me was, “This is why Americans have such a hate for the Japanese.”  Honestly, I was flabbergasted.  This was the OPPOSITE of what Unbroken, and so many other life lessons have taught us.  Holding a grudge despite the gift of being alive, everyone, including these commentators on the movie theatre, realized that the lesson of forgiveness allowed many to become stronger – and move past, simply the past.  There are so many people that keep blinders on and fail to truly welcome and embrace a life that has much room and time to teach us amazing lessons every day, and those not being able to move past prejudices of all kinds, simply limits their ability to live life to the fullest.

As I poured over papers from my specific advocacies’ Model United Nations position papers, I realized how lucky (they do not see this now) but how much opportunity experiences like MUN give students to infuse their own philosophies and experiences in possibilities like MUN.  Yes, I have heard my share of complaining about particular requirements, but the talented individuals that can see past the now, in fact created their papers with a part of why they believe and see in life everyday, and that was refreshing to see the connection to something I overheard, was disappointed about, and could also see how events like MUN could and can be used to extend how someone sees the world around us, and how we can make jot better.  Sure, Model United Nations seems forced but in reality, doesn’t going to school?  Don’t assignments feel that way?  I have found when you combine what is asked of you with what you believe and see and have experienced, education as a whole begins to also change shape, and for the better.  While I a highly disappointed in the comments and way those two movie-goers wrote off the conclusions they had halfway through Unbroken, I can only hope they realized at some point they misjudged too early the overall importance of what they were seeing.

The word accomplishment comes to mind when I look over the past few weeks.  Initially, the ASOMEX Soccer tournament was crazy with the planning, full of activity, mascots, sharks, leopards, fans, players and our girls placing second overall and the boys fighting back and holding their own – I realized how talented our soccer platers truly are.  They make things look so easy once on the field, and then magic just occurs and whole many of us as fans and mascots want to yell, WHAT??  Why did that happen!!!! We all also realized how much sweat time, and practice it took to be even slightly competitive on the field, and how the discrepancy appears from the stands.

In the backdrop you also had the ASF Debate Team going on to do great things at Tecnológico de Monterrey during the 2015 Debate Tournament.  Don’t forget the ASF Jazz Band being featured in the Reforma, 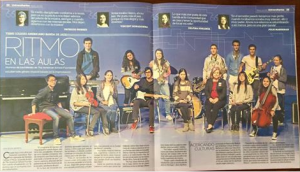 and so many other accomplishments from groups such as Repentino. staff receiving accolades in Columbia and NCTE with the Repentino 2014 award, and more groups that truly have made today, Founder’s Day at ASF – worthy of the spirit of achievement, learning, and accomplishment the founders could only hope for.  The upcoming Week Without Walls trips that 9th graders will embark on, will only contain the possibilities of learning, experiencing and changing the perspectives we think are us, and realize that different experiences mold us into people we formally didn’t know before.

As the week came to a close, I found myself preparing for meeting individuals that were so important to me as a growing experience before I left Mexico, attending a wedding of a student that went on to take her aspirations through the Naval Academy and became one of many exciting students that put her dreams to a realistic test in life.  As I four myself boarding a plane to the states to come back into the world that had once been mine, I would find many exciting visits to aspects of myself that I quickly had forgotten.

So what soundtrack would I be?  That remains to be elaborated on, as there are so many pieces of classic, upbeat, and new age selections that have become my life thanks to the people around me.  Yet, the very reactions to the world around us that do result in taking steps backward help me decide on what pieces of a soundtrack I do not want to become, in order to actually become a selection that mass a difference.  I would be curious to find out what soundtrack would others around me wish to be based on their experiences.