Of course I decided to do the unthinkable, head back to Mexico from a great family Christmas break the night before school.  I never, ever, allowed myself to do this before because yes, the day or so to settle back in was essential, crucial and SANE.  Right?  Yet, making as much time as possible to be with family trumps “planning time”, right?  🙂  The night before, (and having gone all week without seeing snow but feeling dropping temperatures the last two days leading up to January 6th) – rumors of an actual snowfall were seen on the news.  Yet, being involved in the storms while in Pittsburgh, Lake Erie, this was just hearsay, right?

Tuesday morning, waking at 5:00 AM, packing, packing, not bothering to look outside until my cousin stated, “It’s here!”  Looking out – HOLY COW!   SNOW!  I mean SNOW on the ground, (pshshh)  snow coming down,  pu shhhh pu shhhh (this sounds like a rap), SNOW STORM!!!!!  I started packing a little quicker, headed out the door at 5:50 AM, heading to the 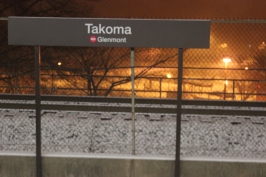 Takoma metro station.  Once there, I unloaded my bags, into at least 2 inches of snow and more coming down, donning my gold mohawk hat, ASF scarf, and Seaford jacket, and headed to the metro pronto.  I grabbed the train and mistakenly started heading at 6:10 AM towards what I thought was IAD (But I NEEDED DCA AIRPORT!) lolroute, but ended up in Rossalyn Station and needing to get to the BLUE line to Reagan Airport.  6:20, and the plane leaves at 7:20 – what are my chances.  An awesome security metro helped me get back on track, I jumped on the metro, heading to Reagan, good, on my way.  Seeing everyone come in snow-covered wondering how much heavier of snow this last day of mine was going to bring.

Closer, closer, 7:00 AM and the plane leaves in 20 minutes, waiting at the check in behind a Delta clerk on the phone, doing a nervous dance at this point (similar to the dance you do when you need to go the bathroom) – finally at the desk, wondering how close I am to 50 pounds (the limit), the Delta man looking at me telling me “You’re late for your plane!” and me thinking, um YEAH!  I KNOW!  LOL  but also thinking, snow and the slippery station in waiting for the metro would also slow others down.  At this point, I panicked and looked at the scale for my suitcase rise to 52, 54, 56 pounds!  56 pounds over and costing me an extra 100 dollars?  No way.  I grabbed the suitcase, unzipped like MAD, stuffing, stuffing into my carry on bag, taking out books, books, piling them behind me, and zipping back up, weight….51 pounds ONE POUND OVER.  You have GOT to be kidding me.  Delta man pushing my bag though and telling me to GO GO GO! (one pound thank goodness was NOT a major concern!)

Rushing to the gate, security, taking everything I own it seems out and onto the conveyor, and not going quickly at all.  Finally past security as though I feel I am dressing in front of everyone, (lol)  7:15 – 5 minutes before departure.  NO WAY I am thinking.  Racing to the gate, and giving them my ticket to board and saying before any thoughts surface, “Ma’am, I missed my plane I know…” and the Delta lady replying, “No, you haven’t missed anything!” and I realized, SNOW.

I look past the desk woman, and yep, no way I am moving anywhere, I look up and the boated says on time and I am thinking, on time?  On time?  What is on time?  My crazy packed, bags on the conveyor belt, my haphazard haggard looking self out of breath?  Laughing because I almost did not make a plane that was not even near our gate, I realized, the snow saved me.  Kind of.

Watching and switching gates roughly three times trying to figure out where our plane would be heading to Atlanta (this taking over a 2 1/2 hour period) no kidding, the sinking feeling hit me as I watched tons of airport crews outside de-icing planes.  How comfortable did I feel getting on a plane that was currently covered in ice and snow,

being de iced, and going up into the very weather that the snow was coming down from?  I have to say I felt less that slightly uneasy, and well, did not know what to think.

After we were told roughly around 10:40 AM we could board our plane to Atlanta, and not sure I wanted to at this point, I did, (realizing I had lost my

Nokia Mexican phone I had held onto with a death grip for four years -NOOOOOOOOOooooooooo), and here we were.  I was sitting beside someone from Chicago (so I could not have any room to talk about SNOW) whose plane also have been maneuvered several times and he managed to get ours, so looks like he would be going first to Atlanta, then to Chicago?, but we talked about the interview he had had with the editing/publishing firm Littleman in D.C., and realized we had been sitting on this plane for over 2 hours, waiting for them to de-ice the plane once, twice and yeah, a third time half way.  The pilots kept apologizing thinking we would be taking off and ready in 10 minutes (which was like squared to the 7th dimension) and no kidding, about 1:00PM maybe?  we started moving to the runway.

No I will be honest, I was not sure initially how I felt about boarding a plane that needed to be de-iced, and being the first plane out of all others to be taking off into the very snow that had kept us delayed, while all other planes were waiting – I felt like we would be the example to other planes whether they would end up leaving or not (If they make it into the air, we’re good, if they come back down with a bang, we’ll wait) – however, it was too late now as we – YES!  In the air towards Mexico!!!!!

I truly cannot tell you how excited I was to be near snowless air as we neared the sun and Atlanta.  In Atlanta, although I had a layover that was not leaving until 7:30, I four myself in Atlanta, about three hours later than expected due to the snow, so 4:00ish was not so bad to wait until 7:30.  Once at the gate for Mexico City from Atlanta, we did find this gate also had been moved to another side of the airport, but with no snow to contend with, I felt I could play musical gates all night if need be.  Switching gates once, all else was smooth boarding, and the movie the neighbor boy was watching turned out to be okay even without headphones (Teenage Mutant Ninja Turtles and MazeRunner!).

Coming into Mexico, I was well, actually a okay!   9:00 PM ish I I actually was ready to tackle school the next day, yeah!  I can do this!  I found a great taxi, the driver raced to my home in record time, and I was in my apartment by 10:30 PM easily – and NO SNOW!  Of course I felt the air much warmer than where I can flown in from, but, still, for Mexico it is chilly I realized the night of January 6th.  The dogs were crazy ecstatic, so were the cats, and artist Andres from Walking Dog had done an amazing job (I was so glad I had cleaned the apartment before I left!!!)

School came the next day, and whoa!  I can do this Yeah, I am not even….then it hit me.  No kidding.  From Wednesday to Friday, I felt like I could not get enough sleep even if I had gone into hibernation.  I found myself rushing home and in bed and not waking a moment until the next morning, and well serves me right.  That whole idea of coming in the day before school, right? 🙂  But, Saturday …well okay, that will have to wait until the next post…I might not have had a white Christmas but whoa, the snow did come just in time  🙂