Thursdays are better – but There is SO MUCH TO ACCOMPLISH!

I think the title seems to cover it,  but even with more sleep, we all felt the impact of a city as large as New York City – and realized how much it can wear you down mentally trying to cover every inch of area and also come out a major leader in a all tasks. We stopped at Oren’s on the way to Columbia, and then prepared for a new day of workshops.

We were off to Columbia at 8:00 as this started at 9:00 AM on Thursday, since we all were not quite in the lobby we decided to wait until Lunch to do our group photos.  We began the morning sessions, with Daniela/Karin and Monica on deck for presenting today – exciting!  I HATED the fact I had to choose between Daniela/Karin and Monica’s sessions, as I wanted to see them BOTH. I hoped to get to Monica’s and started in Daniela/Karin’s session.  Previous to their session, I have to say again, all the workshops were solid, worthwhile, and offered alot to add to our magazine, this one specifically on the criteria we needed to rank higher as a hybrid magazine (electronic and print with using the Tumblr site).  We talked alot about Common Core again, and were excited to see not 30, but actually about 8 standards covered in the tasks we did as a staff.

Daniela/Karin were great.  We had some technical difficulties, switched to Alia’s laptop, (barring the cute picture of Eric/Alia on the screen) – and began to get into why we used video, and HOW we used video    to promote Repentino.  In doing so, we aroused questions and links to other possibilities, such as using Utube Channels, possible Podcasts, and more to offer  teasers to the magazine all along the way.  The connections we made with the audience, were almost as valuable as the information that Karin/Daniela offered.  Speaking to some of the audience members, I never exited the session to see Monica (on nonfiction writing), and I HATED that.  I did rush after this to the meeting point at Lerner, and found out Monica’s session was PACKED, lots of people were inquiring, and Luis had helped with the prompts and getting individuals to respond to Monica’s presentation, she had done GREAT as well, which deep down, I knew all the individuals presenting this year were amazing.

We met and decided on a group picture, 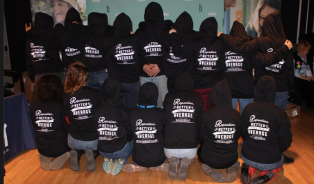 front and back – which was hysterical and fun at the same time.  Balfour Yearbooks helped us with this, and we made this tradition solid again.  We grabbed lunch, went back to the afternoon sessions, and then hit the pavement.  Destination unknown to the staff, we headed to 42nd Street – walked to Vanderbilt and Ta da!  GRAND CENTRAL STATION.

Grand it was, seeing the vaulted ceilings, and taking in the rush that often caused this statement, “This is like Grand Central Station!”  We broke to explore the immediate blocks of Times Square, (finding out Ms. Dixie had strained her back helped decide to stay at the Barnes’ and Noble between 45th and 46th as a central meeting point if needed.  This helped to encourage a healthy dose of book and music browsing).  During this time, I travelled also back to the Imperial Theatre to drop gifts off to the stage managers, Mary Kathryn Fuynt and 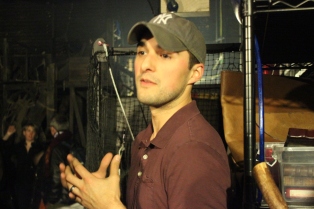 Davin DeSantis, who had led us through the back ways of the Les Miserables stage.  Funny, I was at the window and told I had to go to the stage door, and when I turned around, there was Davin!  (Ironic, no?!) I gave him a collection of items our student a had brought from Mexico, which he LOVED, and moved on to getting items from Pie Face and the take pictures of the pizza place we had frequented the night of the musical. We met back at that meeting point (appropriately) and made plans to drop off at the hostel and celebrate Stephanie’s birthday.  Where?

Well, we had to get rid of these bags for sure, and we did back at the hostel, where we found there was a comedy night.  However, I remembered the previous comedy nights the hostel had, and had not been impressed with the content or the material, and felt inside, we had better company with our own staff, so we headed out to…

…that’s right – Mel’s Burger!  We initially wanted Chipotle, and that was Stephanie’s pick, but Mel’s it was, with the same manager making all smooth and clear for a great celebration, complete with three deep fried Oreo cakes, wishing Stephanie a happy birthday in English and Spanish!  🙂  We convened, made it back to the hostel in a state of tiredness but a full day, and readied for a Final day at CSPA for meet with Ms Kathleen Zweibel, one on one, to discuss the criteria we needed to get our magazine within regulations of a competing magazine, that includes the electronic component.

The walk away from this day was realizing how involved the students were with networking, connecting with valuable skills they did each day with the magazine, and tying together the connections made with people that would further the reach of Repentino..  The teachers, administrators, and staff they met laid the foundation for a deeper level of publishing, writing gathering art, literature, and graphic expression, and in the process, they grew as well.  Exciting to see and I have to say, very proud of this young group of go-getters.