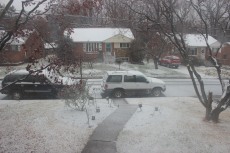 My first snow today in AGES!  YEAH!  I love it!  🙂   So before we are off to see the film The Hobbit, here are some teaser notes from my trip to Delaware:

The Hobbit, in 3d and Imax was AWESOME!  EXCEPT – someone stole my Steeler gloves – AGH!  I placed them down I THOUGHT, in the movie theatre,  went back, and GONE – so now on a trek for new ones – not happy about that – BUT – the film was exhausting, but awesome to see on a big screen, and leaves off with…well I will not ruin it for those of you that did not see yet –

Going back to talking about the trip here, FYI – total tolls in Mexico – 788 pesos – so rounding to 800 pesos leaves you with a total of 61.4568 dollars USD when using today’s currency exchange, from Mexico City to the border then to that original 788 pesos of tolls you add 3.00 USD to cross the Bridge into the border – and ta da!  🙂   You’re in! – now looking at gas costs… $417.94 from Mexico to Delaware – one way, so add that double, and then the tolls double, looking at 960.00 total roundtrip USD it seems, or close to that…so yes, cheaper to fly,  –  amazing when you go back and look over he costs of everything to get to home driving!  🙂

Looking back at the mention of NPR on the way to the states, the NPR broadcast of interest was mentioning the author of Raven Boys, Maggie Stiefvater, Young Adult Lit fiction writer.  This is ironic as I met her at the ALAN Conference this year at NCTE, and she talks about some of the best Young Adult Lit Novels.  She did this on December 20, 2012, but this particular trip north this must have been a repeat broadcast, as I was in truck north towards Delaware, I heard this broadcast and remembered seeing her talk about her book this year at ALAN, Raven Boys.  WOW!  I was excited to hear some of her favorite books which you can find at the above link.

Also, this awesome broadcast about how the Orchestra from Baltimore is extending into Latin America, and how Latin America understands the cuts to the music program should not occur, as it brings a sense of unity together for everyone and I felt this rang the same tune of how Latin American views and approaches education, and escapes the roadblocks I experienced in the states for students to reach their fullest potential…this broadcast I felt was one of the most awesome broadcasts ever and has rippling effects on other areas of the arts and education the states could benefit from paying attention to how education should change to impact future generations forever.  The last comment the conductor states in this broadcast is powerful and should carry farther than the radio waves…

I also recalled noting it was 46 degrees Fahrenheit in Texas, at 11:50 PM on Saturday night, I had to stop on my second day as I could drive no more – my mileage being 150180, and also remarking I had crossed the Navidad River, in Texas…Navidad – perfect for the holidays.

I remember also that I got slightly off track in Louisiana, I did indeed hit route 12, but LOCAL route 12, not Interstate 12, which somehow luckily only put me off track by a little, I spied a local trooper for the town, in McDonald’s, and asked him how to get back on track to Route 10 to ultimately 12, and sure enough, I luckily was only about 15 minutes away from where I needed to be – whew!  🙂  (So far, no one noticed or said anything about my expired license sticker  – super yeah!)  I also remember purchasing my FAVORITE drink here in Louisiana, near the STATE route 12, Yoo Hoo, my GOSH did it taste good to have that !

Finally, I noticed I had a final mileage the beginning of the third day of travel, my arrival date, I had 15316 mileage starting out at 6:05 AM from Virginia to Delaware, and thought, overall, when I had my truck heading to Mexico back in late July 2012, I had around 142000+ miles on my truck, and with having my truck in Mexico and these road trips back and forth,  my current mileage of 15316 was not half bad 😉

I still hate the fact that a truck stop in Texas, there is a live tiger, it just feels wrong. The website states he is in great shape, treated well etc, yet it still feels wrong….:(

Hope everyone is enjoying their break!  🙂