It has been said, as Thanksgiving Break ends, the rest flies in front of you, without realizing where time has gone. The Thanksgiving Break was full of surprises, places I never had been too and as a result individuals I connected with I never knew about, only dreamed about, and had the chance to connect ideas of individuals’ projects across the country together.

It is amazing to see a hostel like One Love, in Puerto Escondido, go out of their way to help me find an only heard of location and find my way to get there. The result was amazing and this opened up a whole new way of traveling to places that boggle your mind.

Add to this the fact that a one Victor Campos, taking on all new projects in Puerto Escondido, involving local materials to introduce new and efficient building methods to a local community, will help create a binding unity of residents within Puerto Escondido itself. Add to that Nina and Andrea, all ranging from all over the world, together working towards many creative goals and individuals and representing some exciting developments that could affect others around them as well. All of these elements, as well as meeting Ausgustine, the proprietor of the cabana and restaurant on the beach front, Chris the caretaker of Augustine’s and other’s residents there, allowing others to attend and visit Chacahua and be able to reference both Augustine and Chris to enjoy this hidden paradise.

That was Thanksgiving, and that was enough adventure and excitement to last a lifetime. Or so I thought. However, the largest surprise was not even in my mind, maybe on the fringes of my mind, but not realized. One who has known me, knows how I have thrown myself into all I do – 100%, be it Repentino. magazine, be it projects, be it past, current, and future library potentials, even to the coverage I look and search for in and around Mexico City for my blog. Often, individuals that have known me ask, what about a personal life? What about dating? I laughed , and have laughed, because I buried that part of my life years ago for the sake of devoting myself to those around me. Weddings, friends, events, and more all come up, often the question comes up, as well as a proposal from a friend to enter that realm, and in my head, I often recite, the following mantras – “I am too old, I am too picky, I am too busy, I am too concerned with the project path I am on”, and that is just the first five or six reasons that surface, leaving the idea of a relationship with anything, other than work, a mere thought and nothing else.   Then add to the mix a past that has had nothing short of bad experiences with anything to do with relationships, and seeing what I have been doing up to this point is actually pretty darn inviting.

Surprises abound. Often the deepest surprises come from corners you did not see even coming, surprises, you often have considered and put away from view, not to be looked at again. Several years ago, a new Pilates Spa opened up on my block in Roma Norte. I know this much about Pilates               (a blank space before this tells you what I know). As I walked by the open window of many individuals participating in what looked as a slide and glide form of exercise, my brood of dogs always in tow following – a friendly, inviting, yes even very attractive face would always wave at me, and the tradition became over the last few years (literally years) to wave back, take in the smile, and think about how nice it was to see an individual such as this particular instructor, take notice of me other than walking my dogs, but as far as I knew, it might by simply because I was walking my dogs. My work week, my work schedule moved forward, years passed.

Meeting my neighbor Nagelli and Robert as my neighbors, and as a surprise, when I had found out Robert was co owner of Museo del Juguete Anitguo in Doctores, I had learned how amazing of a museum, and as a couple, now expecting, and since dating married, I had learned so much about my neighbors I didn’t know about them in the first few years I had lived in Roma Norte. Lesson to be learned there. On this particular day, coming out of my apartment, they informed me someone had been asking about me, and that I should possibly consider finding out more about the original inquiry. I was curious in two accounts, first, who would possibly be interested in me as an individual when I am scarce as it is, and possibly, quite possibly, could it be the attractive appearance I had noticed in the Pilates Studio?

Years would pass, literally over three years and in that time, I would take more and more notice of a certain instructor at the Studio who seemed to notice me & the dogs when I would walk by. On one occasion, I was on the same corner as the “instructor that caught my eye” and we made eye contact, smiled, she asked about my dogs, and I smiled and walked, looking back to wonder, if I should offer more in conversation. Another day, she was outside the studio, I walked by, and sat down, got up, sat down, got up several times, realizing how nervous I actually was in talking to her. Time passed, and something clicked in December. Every time I walked by, I had started to question myself and think to myself and something, something itched at me – I needed/wanted to say something more than a wave.

An opportunity presented itself. Franli’s Christmas party, post Thanksgiving party, and I thought, wouldn’t it be nice to go to a Christmas party, or an event with someone? Franli’s initiative has been one of the best things to occur, showing how people coming together for the holidays is essential, important and valuable.  (Things had begun to drastically change in my thought process about how busy I had been, was and would be and the effect of me wanting to speak to (the instructor in the window of the Pilates Studio) was beginning to transform. Something struck me as unusual. All this time, I never was aware of her name. I thought that odd as we had many encounters of small glances, waving, and cordial hellos – but why not more? I wanted to know more about her and it just hit me on the weekend of the potential Christmas party, it was way overdue to find out.

Picking an evening where I was aware of the time she finished (being a stalker crossed my mind a few times) – I made out a Christmas card wishing her a Great Holiday, inviting her to a Christmas Party, and tried to figure out when I could give this to her without causing a scene among her colleagues, lol. I walked by once, twice, three times, still busy and I wondered when a good time was- or if the timing was just not right. I made it once more past, and whole everyone was still cleaning up, I found myself on the corner, with my Ipad, looking to see what incoming messages I had. During this moment, the instructor came up to me and asked me what I was focusing on so intently. She had made it easy for me, and I had a door open, thanks to her. I laughed, and we started talking lightly, and I asked if she would be interested in grabbing Hot Chocolate and Churros at 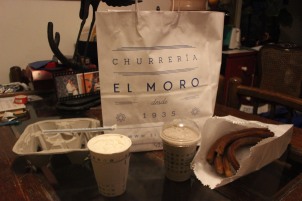 EL Moro, the new Churro business that just opened on Alvaro Obregon. Yes – and we walked together there, then grabbed a package of Hot Chocolate and Churros, we made our way to the bench, and ended up talking for the next hour and a half, seeming to block out the wind, cold, and the night – we became lost in conversation. During this time, we caught up immensely, and although I STILL had no clue of her name – none whatsoever, I found myself intrigued with someone so interesting, inquisitive, and easy to be beside and have such great conversation (and yes, I was mesmerized by her eyes and intensity).

Leading up to my departure for the Christmas Holiday to Pittsburgh, then to Maryland, Delaware, Washington D.C., every day was filled with discovering who Karla, yes, Karla (after all this time) was, what she thought as I had walked by the studio for several YEARS, and all of a sudden, saying hi alone felt pretty full of missed opportunity. Seemingly we had known each other for years, (that is the feeling as conversation turned into other conversations) – and the departure out of Mexico City became one of dread in realizing we were just getting to find more about each other.

Neighbors began to notice and it almost seemed as if everyone wondered why this had not happened before, which caught me by much surprise. However, much of how this all began to unfold caught me by surprise as I wondered, how my philosophy for such an experience in discovering someone had not changed earlier, and realize it should have. Admitting you are wrong is not an easy thing to do, but in this case, I had missed on many, many opportunities to actually find out who Karla was, and finding out she was a diverse mix of so many interesting and unique aspects, I found myself, counting myself lucky, to have been given a second chance. Certainly several opportunities had arisen previously in any situations, yet not one of them ever “clicked” successfully. The timing, feeling, or moment just never seemed to unfold properly and such is life.

When you find someone who is full of optimism, inquisitive questions, is so open you wonder how you did not notice this before, open to all possibilities, and being energized oozes from them, again, you ask, how could I have missed this?

There is so much to tell since Thanksgiving, as the amazing experiences we’ve had in celebrating the holiday as clubs, colleagues, and friends to be told, the trips that unfolded headed to Pittsburgh that reveal a city I knew and visited over 12+ years ago – but being able to go to Franli’s Christmas party with someone I had wondered about for years, and physically being with this person – yes in person, lol, was magical. There has been something unable to be put into words when that right moment seems to click, happen, and you wonder – I should have acted before, yes, but I am glad I acted at all, look what I would have missed! The holiday is full of surprises if you simply look around and decide enough, something needs to be done for a change, and often, some of the best changes come out of that decision to move forward and do something different, and act on feelings you kept below the surface. In the 13+ years that I have really decided not to date anyone, it is funny how things can change on a dime, when the right moment seems to occur, and also how missed opportunities can provide a chance to turn it all around.   Sometimes, if you are lucky, those opportunities can be recovered with the right person. That becomes the best holiday present of all.