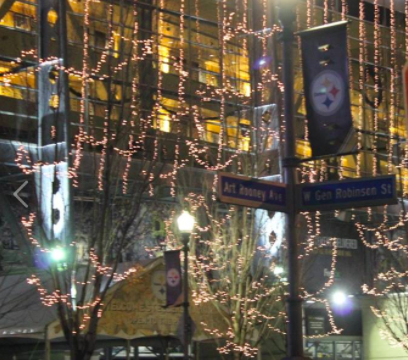 I can’t exactly tell you the feeling I had inside as I approached Pittsburgh, after spending an overnight in Forth Worth, Dallas, and then moving onto a stay in Pittsburgh after longer than I can remember.  From the feelings of excitement of a city I grew up in and weekends with grandparents and so many relatives, to just growing up with so many individuals IN Pittsburgh – I missed so so much and was so excited to explore as much as I could.

At the same time, seeing and feeling Mexico becoming such a part of myself that I never saw it coming, and I found myself leaving behind for 2 weeks so many aspects I had fallen in love with – the mixed emotions ran high for sure.  I was overwhelmed with how many people gave me a Steeler yell or nod from Texas to Pittsburgh, it only caused my heart to beat faster in high anticipation.   It truly was a Steeler Nation.

Coming into the city, and being able to do so during daylight, I had to decompress in the airport for half an hour before actually embarking, everything was still hard to believe.  Going back and forth on social media with an amazing new adventure in life with Karla – I held so many mixed emotions in check trying to allow time to sort them all out into an explanation that I did not seem able to find.  In being able to delay no more without running the risk of frozen there all day,  I moved forward.

Rental car to the tunnels, tunnels to the North Shore, North Shore to the Jerome Bettis restaurant.  Thirty minutes remained and I made it – game time to see the Cincinnati /Steelers games.  Myself decked out – head to toe in Steeler wear, I was surrounded by an even larger party of Pittsburgh fans, and I never felt more at home – I can’t tell you enough how I ate through so many plays, and loved every single feeling and moment of it.  Five minutes before the end of the game, and I had to go in order to catch The Nutcracker performance we had booked at The Benedum, and having not seen the Raypush family in this long as well, I was excited to be lucky enough to jump into all this – the first day and I felt I was reclaiming so much of what I had missed.

The best part of realizing I was in PITTSBURGH, seeing the Nutcracker, was realizing I was taking this in with the Raypush family – and it could have been the lousiest production and still worth its weight in gold.  I loved the music and tale that spun before us, and being able to decompress later at Bob Evans on McKnight Road further helped me get back into the swing of things.  I did find the following day, my whole physical being, in a state of being dazed, be it jetlag or just a slight shock of taking it all in, this day was spent locally shopping at the Pittsburgh Mills’ shops and just laying low – realizing I badly needed this.

Touring through so many neighborhoods in Pittsburgh the third day, quite amazing.I shot like a bullet to North Shore, stocked up on Steeler supplies, haunted my old favorites at Eides  (still amazing bur much smaller than I remembered it!) – headed over to the North Side to see the neighborhoods – was able to travel downtown past the Warner Theatre, Liberty Avenue, revisit the Strip District at the docks, making it to Station Square to meet my friend Heather, who I had met in Mexico City!  LOL

The Hard Rock Cafe was amazing just because it is Hard Rock Cafe, but Station Square was resembling the old malls that had little to offer people from the outside, shops and spaces were so much more open and not filled, not resembling the club and active storefronts that could be found here over 16 years ago, and I realized, my expectations are not the expectations of that those that have lived in the Burgh all their lives. The other amazing was seeing how Pittsburgh and Mexico were connecting me.  Meeting Heather, a Pittsburgher who lives in Pittsburgh but had been with us in Mexico City so much, it is ironic as I waited for Heather in Hard Rock, how 25+ years ago I would have never been able to predict how Mexico and Pittsburgh would close the gap between us in my life.  It is pretty great!

Coming back at night was a gift in seeing Pittsburgh completely lit up, but some of the best moments still were the moments I was able to laugh, joke, and catch up with the Raypush family during this season over games such as

Bean Boozled, which I swear I still have the taste of rotten egg in there somewhere LOL – STILL.  Thanks ADAM – I thought that was going to me more FUN that rotten (it was FUN!).

Heading out on the early morning of December 23rd to the airport to drop off the rental car – (changing the flat tire the previous night with a bad jack?  Not so cool and fun) and grabbing the Amtrak train to Philadelphia – then to Union Station in Washington D.C. – it still was surreal to me to jump back into a town that I called my own, and I still was going to take a few weeks to process it all in just being back.  However, every year I am still amazed at how comfortable it is to slide back into the friendship that the Raypush family and I had created- not knowing way back when we commuted together to Slippery Rock University, how much it would mean to me to see them when I did come back to Pittsburgh.  I meant everything and I realized, the longing of missing so much in being away from Mexico, still allowed such a needed space that I looked forward to so much in seeing Rachelle, Morgan, Mackenzie, Madison, Joe, Jeff, Amanda, and Adam.  I thought the best thing was visiting Pittsburgh, but realized all over what matters are the friends-like-family hold you in place, no matter where you are!