It has been ages.  This might be the longest gap I have had without a post – but to tell the truth, so so much has been happening, I do not know even where to start when it comes to putting it into more than just experiences.  Hence, this blog, which I am grateful for, to have individuals that read and comment on, which adds to what I experienced.

However we will start with the most impacting and work all around, as it usually happens.

March 13th – wow.  Craziness – a year just like that, and yet there were stretches where I thought it would never come.  The CSPA trip – came and was right in our laps – like THAT – travelling with a Repentino. staff of 9 to take in the CSPA awards, as well as present a billion (it seemed) workshops on various topics to show – that Repentino. is certainly not static in the least, active in many areas and how others can join that ship too.

Running around like CRAZY on the 12th ended up staying up all night (again) when did I do two all nighters in a row – a billion years ago!  From watering plants around the house, to emails to prepare for things that needed to move forward, to workshop work on presentations, to emails to individuals we’d visit, the 4:30 AM time came so fst, I was walking the dogs, packing, feeding the dog, a million things in one blur – and boom – on my way to the airport – and grateful we had 9 staffers to attend New York this year, and also grateful for Nina who attended last year’s CSPA and of course, our award being stolen on the metro, Nina and I experiencing workshopping, presenting, receiving, and just the whole New York experience?  Hard to put into words  🙂

Here we are – 9 great students, and as I waited in the airport, slowly saw them trickle in and met their parents, their tired eyes, with my own tired eyes, I already knew how lucky I was – these were the reasons we started Repentino., to experience and interpret life outside of a print magazine, with that one print magazine to be the center of so much accomplishment.

The plane, the baggage, the boarding, all without incident.  Passports and Korea, as well as making sure situations representing students from outside the U.S. from anywhere always can present a challenge, but yet, despite having to go back through immigration twice to make sure the correct copies of our SAAM form were stamped  no biggie – it all worked!  Yet, while at the airport in Mexico City, we ran into Dr. Lawrence’s brother, who had been here in Mexico for awhile and motivated us to capitalize on the assets we have inside ourselves – and do something to represent those very talents we are interested in and are good at.  His motivation started alot of ideas for projects alone, and seeing him at the airport was fitting, as our Repentino. group believes in that mantra, and there he was – he was inspiring on many and glad we were able to see him off together!

“Mr. Brake, you looked bored !” was said once as we landed in New York, but this was not due to boredom at all, the total lack of sleep that I knew would be satisfied in the next day or so! After an onslaught of movies being watched, songs being listened to, and catnapping between interruptions, but being IN New York seemed to settle on all our shoulders – excitement built.

We got off, our baggage, and out in record time waiting for our Shuttle, from Go Airport Shuttle and after waiting a bit, 30 minutes) we realized that he had been waiting outside for us, the black Mercedes private van – it was a smooth and comfy ride – and nice to really to be on our way.  The driver was great with loading and unloading our luggage and arriving was effort free.  We underestimated landing at 4:30 – and being at Mel’s Burgers at 6:30 – so Val called ahead and changed it back to 7:30 and we weaved slowly through the NY traffic, and found ourselves in front of Jazz on the Park at 6:50 – keys on hand to our rooms – settling in, back at the lobby and 7:20 – and headed to Mel’s Burgers – and did we mention WARM!  It had to be almost 58 degrees no cold, no snow, a trickle of a rain felt here and there — and NO WINTER gear needed- WHOA!

Smiling, (I could not help it) the memories of being greeted so warmly and conveniently by Jazz on the Park came back to me over and over, and the conversations so many different staffs had as we experienced this city together came back over and over and over – making this trip worthwhile before it even started!

We headed out with empty stomachs, and made it to Mel’s Burger Bar on Broadway – greeted by Eri our server.  Let me tell you this guy was and is a mover and shaker.  Not only a real estate agent for apartments, houses, and SO MUCH more in New York, he took our group of 11, seated us in front of the traditional MEL lights in the back, waited on us hand and foot, (California Burger, Garlic fries

, the Mint Milkshake (preparing for the Shamrock Shake!) provided us amazing fried Twinkies, Oreos and MORE – complimentary and on the house from the manager Jessica Cui.  Between the service hospitality, and friendliness of Ms. Cui and Mr. Minaya, amazing. 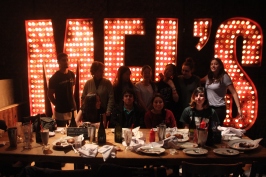 Following this amazing welcome, we moved to the metro purchased our unlimited Metro ride cards (Thank you Val for navigating us to that spot!) and onto the metro.  Before seconds, a transgender passenger was chatting everyone up and a super hysterical and friendly individual never lived.  Along that conversation I was called at as being a Billy Bob Thornton double-   Really?

always amazing.   Tons of shopping and seeing the staff in their element among the bright light and city – totally worth it 100%!  We hit Wegman’s/Duane Reade for supplies, that followed an evening of seeing a Times Square full of excitement, and not alot of people.  What am I forgetting?  I am sure something about our visit, but I will be reminded before we go to Monday.  But all of the potential this staff brings to New York, and really, the idea of New York itself I realized, was a great experience due to the staff that accompanied me each year – and not much can be said more about that.  Great things are to come.