‘Tis the Library Season and Reason… 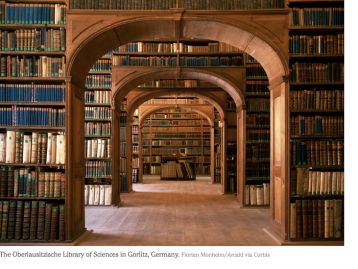 Every once in a while I am lucky to have colleagues pass on some reminders of what libraries and librarian are. Usually those articles come right around Christmas – and are gifts in themselves and help me re-examine the role a library and librarian has to the greater public.

Chris Muller, (I know he thought I forgot after all this time, I DID NOT!) sent me an email October 23rd that really was refreshing in seeing how the stereotypes of libraries are being set aside, as well as the stereotypes placed on the role of librarians.

Titled “Reinventing the Library” an article by Alberto Manguel in The New York Times, I continue to realize many aspects of what makes a library timeless. Sure, perhaps the Alexandria Library started the legacy of the importance of libraries. Yet, the patrons themselves help reinvent the library. True, it is the responsiblity of librarians to be creative in reaching out and demonstrating how all kinds of social media, involvement in all areas of the school, how to implement research and creative research to promote not only literacy, but students in a variety of activities, as well as using research to discover happenings in your immediate neighborhood, as well as showing how libraries can motivate those around you, BUT – it is an investment needed by the patrons as well. Every user of a library needs to belive in what the library can do and guess what results? A timeless position in a world where events, innovations, and discoveries, as well as the attention needed for them, change faster than the speed of light. I particularly like the following excerpt from Mr. Manguel’s article:

“If libraries are to be not only repositories of society’s memory and symbols of its identity but the heart of larger social centers, then these changes must be made consciously from an intellectually strong institution that recognizes its exemplary role, and teaches us what books can do: show us our responsibilities toward one another, help us question our values and undermine our prejudices, lend us courage and ingenuity to continue to live together, and give us illuminating words that might allow us to imagine better times. According to the Greek historian Diodorus Siculus, one of the ancient libraries he saw in Egypt carried above its entrance the words: “Clinic of the Soul.””

I find that you, the supporters of all that the library can be, has been, and will be are the reason the stereotypes of old fall away and the librarians of today, in lieu of cuts, budget shortcomings, and evaluations of what is important in a school and what is not, are the scaffold that allows libraries to reinvent themselves.

But there is more…just when I thought I had reached the epitome of stereotyping erasing, colleague John Calvin sent me the article on September 24th, even FURTHER back than Mr. Muller’s that really took the cake – and seemed to just slip the two article together. Tapping into famous author Jorge Luis Borges, writing The Library of Babel, I was blown away. The genius of Jorge Luis Borges is certainly only TAPPED in this article. Yet, a more modern-day take on this by James Colbert in the Colbert report continued to add to the role of libraries today.  Colbert’s audio translation of Jorge Luis Borges’ The Library of Babel also helped me to listen/examine the ideas of being lost in a sea of information fed to us by individual with a designated mission/objective.

Certainly, it is so easy to overlook how Google automatically sets what you receive in hits based on past searches and how so much is controlled in today’s literary experience with the media. Yet, even more emblazoned in the role that libraries play as a stance to this brainwashing that can occur if we succumb to the fact that all is believable. I am and have always been in love with libraries because within, and with the right individual, you can find solace in the fact that libraries can provide the opportunity for truth not influenced by the media, and yet you can still find those examples as well. The comments that were generated from The Colbert Report, from the reference at Jorge Luis Borges’ The Library of Babel, is so interesting, so DEEP, and shows there are individuals that belive in separating from the general amuck of media today.

I see libraries as beacons of truth supported not only by the librarians willing to represent what is true, what is available, what is empowering, but also by the very patrons that belive there is an oasis where one can recline, dive into information that motivates and eases, and believes in the power of true education minus distracting influences. Thank you one and all for your belief that literacy does not have to evolve solely from technology, but can be strong alongside, without brainwashing. Thank you Chris Muller and John Calvin for sending this my way – your beliefs in what the individual can do amid a system is promising!