4:15 AM kept beeping at me like a blaring fire jam…(That should make English teacher’s happy that I used a metaphor) – yet as I ran around, walked the dogs (with a bit of sadness in leaving them) – (FORTY TWO – I was 42 today!  – AGH the time flies!)

I just made the taxi at 5:10ish as he was waiting for me at the door.  Early but nice to be on my way!  SO nice to be on my way the I left credit cards behind, yet, I knew that leaving my credit cars behind was probably a smart move as this would be less of major bang I’d put into my money, lol. but I was lucky to have stashed funds in to my existing checking so no prob.

AT the airpot at 5:45 AM – and Tiana came through and slowly everyone trickled in with their Repentino. sweatshirt – most having boarding passes and having their immigration done – yes, this was easy and amazing – the small probs with tickets not being printed was not that bad at all, and having Rocio at the airport actually was a HUGE help with the small probs we did have.  Within minutes, believe it or not, the issues with immigration, paper gathering, credential gathering, were behind us.  Not thinking that was possible, but yes possible and it was true. The smiles on their faces as they wished me a happy birthday was AMAZING and they made my morning, and everyone’s parents (including one Sonia’s Mom whose birthday was TODAY! – were gracious and so amazing, they helped with this alot too, and that was an understatement.

We managed to all get through security, yet, Alia realized at immigration her FM3 was still with her father, and they wanted this.  Her father luckily did not forget to still be at the airport, and he was able to get this to her, one victory!

But wait – Cassandra’s carry one was overweight, so we go her through, and then, Nina, was told she had the wrong immigration form, and we went back to get it again, and then, as luck would have it, the plane told us all were boarded and they were taking no more when we came back trying to board, yet, no worries – we got on and this was amazing to add a little birthday twist to the trip before hitting the actual airspace, and we settled in  🙂

(I have to be honest, I was overweight at CHECK IN – so I was bad from the very beginning!) 🙂  However, I still liked this birthday alot thanks to the people around me.

We settled into the plane, and then ta da!  OFF!  I saw something I never saw on Aeromexico, we had movies built into the seats, and chatting capability with every seat. Yet of course, my movie froze and my chat didn’t work, lol.  But I did clip a peek at a GREAT racing movie I wanted to see in the movies and saw everyone else’s version of Percy – so it was all good.  🙂

Finally – before it was even beginning it seemed (minus the amazing and crazy energy Sam and Fiona had the whole trip) we made it to New York!  I called my Mom, and we all settled into getting ready to be in New York – we actually ran through customs easily and grabbed people’s bags quickly, and boom! – we were through!  A slight delay – 40 minutes – waiting for the designated shuttle, Izabel lost her scarf and we frantically looked for it AND ta da!  WE FOUND IT!  YES!  all was saved, we got onto Go Shuttle, and had the driver as a tour guide, AND, the students presented me with a 250 pesos certificate for Books Under the Volcano – amazing and so thoughtful! – and we made it to Jazz on the Park.

Another word, first year at Jazz in the Park for Mexico students and we found Dane Orhi, a performer we liked and we grabbed sent to Delaware for Battle of theBands, and went on to do HUGE things in California – so a little seed we pulled and that grew into a forest about Jazz on the Park – We checked in speedily, got into the rooms, and began to meet in the lobby for Mel’s Hamburgers.  Let me tell you about this.  Mel’s WOW.  They were waiting for us despite getting there at 8:15 instead of 7:30 – and we have STORIES.  Miranda fell unbeknownst to me, on the way in, scratched her knee badly, but the manager, Pedro Fajardo, the assistant manager, grabbed Peroxide and bandages without even thinking for her.  While she doctored her cut, I ran to the pharmacy and grabbed Neurosporen and bandages, and she was set!

Now a word about Pedro – He was called into day and had been here since 11:00 AM since the other manager was getting survey getting, I think – her appendix put – can you believe it?  We like to think he was there thanks to fate and he was quick, efficient, and gracious!

Thick milkshakes, huge burgers, and fries bigger than we even managed, and tons of food.  But add to this the amazing friendliness of Jamal Clark Turpin – who was patient and amazing throughout the WHOLE crew, and serviced us every step of the way, even with the check process trying to getting it all together.  AMAZING experience and the assistant manager together were AMAZING, and the students, through singing happy birthday to me with a cake, and just being patient, were just as great – this was the reason we stopped here first all the time.  Mel’s Hamburgers was truly a class act and these two employees where why, they showed the mentaility of Mel’s Hamburger’s we have come to know. 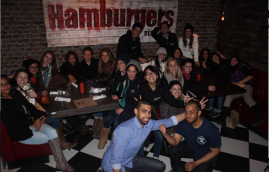 After finishing, around 10:00 PM, we hit the local nearby Rite Aid, and grabbed items, and contemplated hitting Times Square an yes, it was COLD – 🙂  However we decided to hold off on the metro card purchase for tomorrow as e would see it, and 0f course, we would do on Monday and get warm and rest for Sunday night.

Yes, thanks to Sam, Fiona, and Nina, they grabbed me a combo of a Mexican statue, chocolates, and Kaluha candy finished the wish for a happy birthday.  You know the cool thing?  I had my birthday all ready just being with these great students –

Hang tight because we have MAJOR photos, but I need to find my camera cord and will add them later today for all to see I envision buying a camera card reader and will do so today.  You will be PLEASANTLY surprised.

Maybe it is me but I notice the events around the world on the news MUCH more – and wait, I see a television in Mexico where I do not watch in Mexico since there is so much to do, -yet the news on the Malyasina plane that is possibly in the Australia area, questions around the route being rerouted by the pilot, the noises within Russia and neighboring areas, men saved from a  truck that went into a ravine form a helicopter and much much more – and a flight to Mexico diverted to Denver rerouted – I am mesmerized with the news going on the news.   Yet, here we are, ready to make news of our own with a passion for art, writing, and reaching out to others.  I think this is a pretty good place to be, and watch out Shamrock Shakes, I am going to rock the world of Shamrock Shakes today.

5th Avenue, the St. Patrick’s Day Parade – tonight – Two boots and Open Mic!  About the parade – The Guinness company protests the ban on openly gay marches pulling out of St. Patrick’s Parade, so more controversy on the parade as well today!

Thank you for the birthday wishes which tells me – how LUCKY I am to be surrounded by amazing family and friends, no matter where I go, each of you are there – how lucky am I?  Pictures to come!