I have gone to Tom Petty, Phil Collins, Jimmy Buffet, Van Halen, Slash, George Strait, Amy Grant, The Eagles, Sheryl Crow, Clint Black, Hilary Hahn, Michelle Branch, the Hooters, lol, Tom Petty, Bruce Sprinsgsteen, the Dixie Chics, to name a FEW, met them talked with them, attended as a concert goer – and well, I have to say, this is a FIRST – attending a Ticket master… 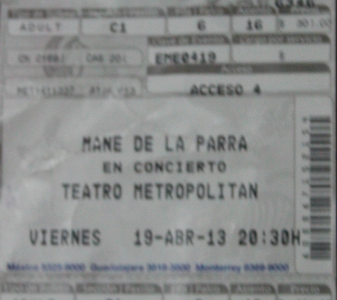 …event of someone that is the SISTER of the performer.  (Mane de la Parra) I have to say, this concert was unlike anything I had ever seen.  That is a tough act to fill, ranging from classical, to rock concerts I have attended, how can one, be everything. Yet it was.

“I have your ticket for you, do you want it now?” Camila came up to me Friday and gave me her brother’s ticket – and I asked, “My gosh yes, when is it?”  “Tonight!”  (Tonight I thought?  Really?)  I have a Sound of Music ticket tonight and realized I just made a donation without being able to go to Saturday’s concert.  Sure enough, I had my night switched, not upset, but hoping I could even find the Metropolitan Theatre, even though  knew enough that is was in Centro.

It’s funny, not knowing an artist is not why people usually go to concerts, they have a background before attending.  Being on the opposite side of that equation, well, I have never been in that situation, so not having expectations was a whole different story for me, and set up me taking in the audience before the stage would be set.  The audience was made up of mostly people in the 30’s at best – (as the oldest) some 50 ‘s alot of teens, I was impressed.  I thought, “I have NO IDEA” what I am about to see (lol).

I have to say, you take all those artists I mentioned at the beginning, and truly, you had that in one stage.  I honestly did not think that would be possible, for someone that is an actor, musician, guitarist, and singer to name a few, the whole package was at the service of all attendees.  I counted 11 supporting musicians at one point.  ELEVEN.  Add six dancers that came on at intermittent times, then three  more supporting singers later on in the show, and oh don’t forget, during the show at least three Mexican celebrity singers that made appearances, and you have a 2 1/2 hour concert that no one could touch.  I mean NO ONE COULD touch.  Period.

Audience members were up and dancing, and I have to say, the music ran deep – not just on the surface.   Have I seen better concerts?  I am not sure I have seen the depth and caliber, no.  Bringing someone up on stage from the audience and serenading them, as well as bringing 5 audience members up and having them as part of the dance group, on top of everything mentioned above, you find yourself EXHAUSTED when the end came, but smiling from ear to ear.

The Metropolitan Theatre instantly reminded me of Pittsburgh’s former Syria Mosque.  I had seen Duran Duran there and the place was breathtaking, I mean BREATHTAKING.  Same with the Metropolitan Theatre, the rising pillars, lighting, and architecture in general, is easy to miss, but once you take it in, you will never forget it.

So think about this, being the grandson of Yolanda Vargas Dulce, (if you do not know her, stay tuned but you need to do some research on her impacts on Mexico) and my student’s (Camila de Parra) brother, Camila is the editor in chief of our Repentino., can you imagine what things are in store when Camila goes off to her adventures after graduating this year?  We haven’t even talked about her sister yet.  Normally, you would think this would put pressure on her…yet, she has nothing to feel pressured about, knowing what can be done, even if she planned small or not at all, the future will be amazing with the enthusiasm and energy her family exudes. It’s funny, all I could think about at the concert was how hard it will be to let her go at the last Open Mic and graduation…crazy stuff. Her brother, amazing….:)   I find I can’t share the discoveries of Chapel Branch and Tesla in this blog post, as this one is strong enough on it’s own, and through the conversation in this blog, I have enough for the next 6, so remember…. Yolanda Vargas Dulce, research.  Stay tuned for the next fee discoveries that will make a change or that have already.