Often I am asked “How does Mexico celebrate Mexico?”  The same feeling exists, you see Christmas trees, lots of lights, lots of treats and much much more.  But I thought it best to give you a short index on it all too and thanks to Lidia and Peter, from Azteca Travel,  who have also done a great job of keeping everyone informed!

Flor de nochebuena: Perhaps the Mexican Christmas decoration which English-speakers are most familiar with, red poinsetta flowers adorn Mexican homes at Christmas time. There is a Mexican legend about how the flowers came to be associated with Christmas…. One Christmas eve (nochebuena) a poor girl picked a few weeds to bring to church for the baby Jesus, for she could not afford anything else. The other people in her neighborhood looked down on her, but she believed that Jesus would appreciate any gift given in love. When she arrived at church, the weeds bloomed into a wonderful bunch of red flowers with thick green leaves. Then all the people around knew that they had witnessed a true Christmas miracle.

Los Tres Reyes Magos –  (Three Kings Day) – January the 6th is a special day in Mexico. Known as ‘El Dia de Reyes’ (Three Kings Day), this holiday represents the height of the Christmas season. The date marks the culmination of the twelve days of Christmas and commemorates the three wise men who traveled from afar, bearing gifts for the infant baby Jesus. The children of Mexico in particular look forward to this holiday as traditionally, gifts are exchanged on this date, not on Christmas day.

In Mexico and many other Latin American countries, Santa Claus doesn’t hold the cachet that he does in the United States. Rather, it is the three wise men who are the bearers of gifts, who leave presents in or near the shoes of small children. The holiday is also known by the name of the Epiphany which dates back to the 4th century. A grand feast would be held on this day to honor the occasion of Jesus’ baptism and to pay homage to the three wise men.

Nacimientos – Scenes depicting the manger in Bethlehem.  These are crib scenes depicting the birth of Jesus in Bethlehem, and the visits of the Shepherds and the Three Kings. Most Mexicans are Catholic and the religious aspects of Christmas are an essential part of their traditions. Few Mexican homes would be without a nacimiento at Christmas time. The baby Jesus is not added until midnight on Christmas eve and the Three Kings do not appear in the scene until January 6th,

Nochebuena – On Nochebuena (Christmas Eve) it is traditional for Mexican families to attend midnight mass before returning home to a late-night dinner. Gifts are not usually given at this time, but this is changing with increasing cultural influence from the USA. Santa has started coming to Mexico!

The Poinsetta flower comes from Mexican Christmas tradition. In Mexico it is known as the ‘flor de noche buena’.

Pastorelas are a traditional form of Christmas entertainment in Mexico. They began many centuries ago when Catholic priests would act out scenes from the bible to teach the local population about Christianity. Pastorela means ‘little shepherdess’ and these were traditionally Christmas plays about the story of the shepherds who came to visit the baby Jesus. The tradition has grown into more humorous stories of the eternal struggle between good and evil.

Pinatas – Pinatas in the shape of the Christmas star are a traditional Mexican decoration which also serves later as a party game. Piñata star: Piñatas are a well known Mexican custom, and at Christmas the most typical piñata in Mexico is one which represents the Christmas star. Piñatas are made of paper and filled with treats. At the parties surrounding the posadas, children will put on a blinfold and take turns to try to hit the star with a stick. When it bursts the candies shower down to the floor and are shared with everyone. 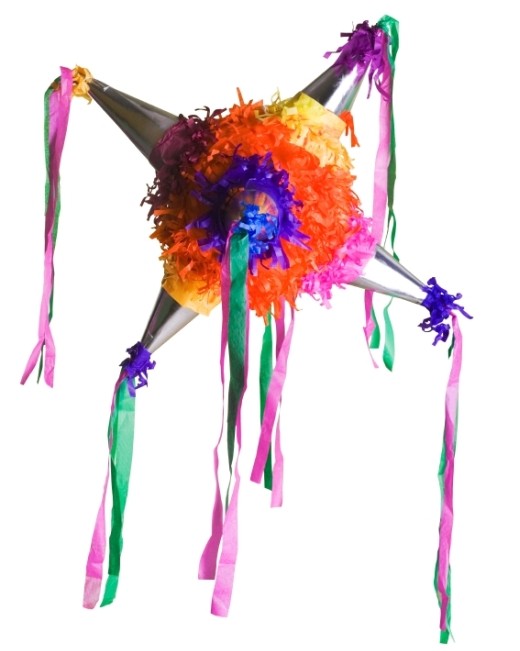 Ponche con piquete – At the posadas parties that lead up to Christmas Mexicans will serve a drink called ponche con piquete. It isa hot punch based on pulped seasonal fruits mixed with spices such as cinnamon, with an added shot of something alcoholic – the piquete, or sting – such as rum, brandy or tequila.

Posada – Processions which take place on each of the nine evenings leading up to Christmas Eve (Nochebuena in Spanish). From 16th-24th December the people in a Mexican neighborhood gather together and process through the streets to a particular house. The neighbors take the part of the peregrinos or pilgrims (ie the Holy Family) in a song which is chanted back and forth between them and the residents of the house who play the part of the innkeeper.

Rosca dey Reyes – Recipe here  On January 6th, the day marking the visit of the three kings to the baby Jesus, Mexicans celebrate by eating a cake known as rosca de reyes. The cake is baked in a circular shape. It contains dried fruit and spices and is delicious served with a steaming cup of Mexican chocolate.  The Rosca de Reyes has an oval shape to symbolize a crown and has a small doll inside which represents baby Jesus. The doll figure symbolizes the hiding of the infant Jesus from King Herod’s troops. Traditionally roscas are adorned with dried and candied fruits to symbolize the many jewels that a crown would have. The person who gets the slice with the doll must host a party on Día de la Candelaria in February ; the custom is that whoever finds the doll must host a party on Candlemas (February 2nd).

Three Kings Day – (Epiphany) – Epiphany, or the 12th day of Christmas, falls on January 6 and marks the official end to the festive season for many Christians. Today, (January 6, 2017) Pope Francis held the Vatican’s annual Holy Mass for the Epiphany in St Peter’s Basilica in Rome. The ancient Christian feast day is significant as a celebration of the baptism of Jesus by John the Baptist, as well as a more general celebration of his birth. The six Sundays which follow Epiphany are known as the time of manifestation.

Villancicos –The singing of carols, known as villancicos is also a common custom. There are many Christmas songs in Spanish language which are traditionally sung in Mexico. Some are religious carols such as Noche de Paz (the Spanish language version of Silent Night), others are fun songs like Feliz Navidad….

Awesome reference links for the above referenced/quoted info: