Many wonder where Thursday as the name came from, and in looking you see the Norse God Thor as well as Jupiter are referneced to the element of Thunder for this day.  It seems fitting as the brave and talented staff that started the emergence of shared skills from our experience in Repentino. continued to bring down a power presence on the second day of CSPA attending and presenting.

In waking up the pressure of knowing we had our session, Putting Your Money Where Your Mouth Is, I headed again to Columbia.  Yet, Had to make that stop – that trademark and welcome to New York stop along the way –

at Orens Coffee house on Broadway.  Just something about the mugs, muffins and chai tea there – dropping off some photos as well from Mexico for the staff, it seemed the morning was underway.  Grabbed an extra lanyard and for a staff, heading to Hamilton Hall and of course nervous.  It was about 3 minutes before the workshop and no partner in sight and then – WHoosh.  He was here  😉  WHEW!

We began a little rusty as I was nervous and could not find the presentation we made, but before you knew it, whoosh – it all fell into place.   Making sure the infomration of personality tied to the physical forms we used helped to push the topics forward into what we actually DID as a publication.  The first two sessions were hardly full to the brim, yet the second session was memorable as we created a spreadsheet and attacked problems head on for publications and hopefully gave them something to take back with them.

11:00 was showtime for us, meeting with Mrs. Zweibel for a one on one critique for our publication, then lieterally also referring to show time I was calling at 11:00 ( a little earlier due to nerves) to book tickets to replace the show we missed – on Monday – to try and pack a double feature for TODAY – the Phantom on the Opera, then the show Chicago we had scheduled when we thought we knew the correct time – but this left the timeslot for Valeria and Natalia to try and relocate, alot of features to move around.

Calling and in on the phone queue, waiting waiting, representative!  Talking talking NO!!  Seriously?  Matinee full?  Hang up, call back a friend in desperation asking if he can help at all, knows anyone, sure enough call back, wait wait, yes!  We’re in!  ELEVEN tickets for Phantom at 2:00 – then Chicago the show at 7:00 – so one final element… and sure enough.  We had been able to swicth the session today for Friday, so Val and Natalia can get their workshop in and we can watch as a group – what the – not wondering anymore about HOW – or WHY – just that is came togethet like a thunderclap – we headed out and knew – it would all work thanks to alot of collaboration on our staff – it worked – despite the loss of several years (at least it felt like as we tried to make this work!)

We jumped on the metro – headed to Shake Shack  – I grabbed yes – believe it or not, the famed Shamrock Shake – I bought two and found I cound only eat one, the sweet was SWEET – but goal Shamrock achieved.  We made it to grab the tickets – while the other half grabbed the Chicago tickets, in line, and yes, we WERE GOING TO PHANTOM OF THE OPERA!

Knowing the story, knowing the music, I expected a little bit of a let down.  Yet so many things – the music and wonder of the talent behind the voices, the amazing chandelier

, the music that resonated through you, hearing those near you aah and ooh at the sadness and beauty, you could have known every little detail of Phantom and still not be disappointed.  I forgot alot about the small details, the clapping monkey that seemed to send out the whole theme of the musical, the lulling sound of Masquerade, the beauty, the sadness, and representation of what musicals are supposed to do for your soul.  At the very end, the love of seeing the cast come out and ask the audience to contribute to the cause of AIDS and Breast Cancer, – it was the masterpiece touch. 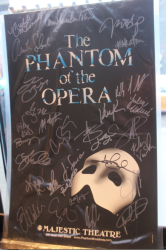 We ended up purchasing a poster signed by the cast to represent the experience we had of getting the Phantom tickets  and acheiving this at first seemingly disappointing letdown when we missed the time, and then we prevailed – so much is symbolic of what Repentino. has done in four years as a staff.  Funny, the DAY we went, this Thursday, was the 1700th performance of the stage performer, Michele McConell, who played Carlotta Giudicelli, and I thought, we would have MISSED this performance IF we had been on time Monday – soooo did it all work out for a reason?  One wonders.

Leaving the Majestic Theatre, we had a break until Chicago – I thought how ucky we are to see two in one day! – thanks Val for the suggestion to grab a second :).  We split knowing the EXACT time for Chicago – and headed to – Chipotle in the Theatre District– the icon of Repentino. staff every time we have headed there 🙂  It was delicious but as we headed there yes, the sky opened and rain, lots of it coupled with rain and you had to wonder, what is happening?  Yet, no snow, and just rain, so it was okay even with the rain and wind pelting us.

We wandered a bit, found a Starbucks, charged the necessary equipment,  (phones, laptops etc)  and before e knew it, met at Tickets where we had made the decision to see Chicago and voila! – in line, different theatre, different show.  I recalled the movie Chicago, the soundtrack and honestly wasn’t sure how excited I was to see Chicago, our other chaperone opted to see the Carole King show, and I thought of how amazing that would be as well.

We got in quickly, settled in, and the start!  What was also amazing with this musical was the energy and participation the conducter had in the show, the creativty and precision of the dancers in the show, the interactive role of the performers, and the use of the set to liven various scenes.  For sure, this was as exciting and rewarding as Phantom and in totally different ways.  The song When You’re Good to Mama, by NaTaasha Yvette Williams was just – riveting and full of blues and soul and the rhythm could not fail to find you – All that Jazz, Razzle Dazzle, on and ON – Amazing.

When you watch two amazing broadway shows in one day – well you just walk out wandering – what just happened?  We headed back and it actually seemed early comapred to the running we did so far in the week and yet, the memories we have collected to date – helped make the close of the day more than a memory.  Yet, more great performances were to come for CSPA on Friday.