Middle of the Week for Some, Beginnings for Us

If you were asking, Yes.  Wednesday, March 16th,  while it was my birthday – and trying to keep up with the countless birthday wishes (thank you everyone!) – I thought little of this heading to Columbia early to register everyone at Columbia.  Ball of nerves.  100%.  While it was the students who were making a run at presenting, my stomach was in knots for them.  I was able to get to Columbia early, recognized Mr. Sullivan, Mr. Rodriguez, and Ms. Castillo right away and they me. It is during being able to be recognized and welcomed when returning year after year, and this conference is no less reassuring to have that occur.

As hundreds of students streamed in, we went through a new system of registration machines and doing so electronically, I grabbed the necessary workshop booklets, lanyards, badges, the staffers arrived, they headed out to eat breakfast – I headed to Hamilton 717 to check out the equipment to ready for our two morning workshops with Alexandra, and then Alexa’s marathon session of three back to back workshops.  All in all, it would be a challenging first day with the early hour, and the length of time we all had to present on the first day.

We were rusty, quiet, and shy at first and had a few attendees but not alot.  However, with out first workshop of Dreaming Our Publication into the Future, and a second session to help guide individuals with challenges they need help with, we did a-okay!  It was exciting to see Alexandra warm up to the attendees, and she ended up carrying alot on her own, and doing so so well, which is exactly what is supposed to happen.

You realize tha workshops take on a different purpose upon presentation.  Rather than bragging rights, or trying to reveal the creativity behind a publication, you see other people’s concerns and then begin to apply what you have done and know, to their situation.  You slowly realize somewhere along the way you became someone who KNOWS.  I hope that the staff realized this – as they did indeed step forward and offer solutions t what we had to overcome, and what others expressed a concern with.  From how to organize, how to break away the stereotypes of what publications DO, to a peek inside leadership, we covered so many areas – kudos to the staff to take such risks.

After our first two successful sessions – came lunch.  Jose and I split to Amir’s again, (similar to hitting there every year) and each got a toasted chicken wrap with tea – overall it was great.  We were the first ones in and witin 10 minutes later, not a place to sit or stand – we lucked out!

As we finished we made our way back to Hamilton Hall to see Alexa go through her workshops – she conducted herself with authority and her confidence grew as she went along from first to second, then a third presentation.  Her first workshop on … 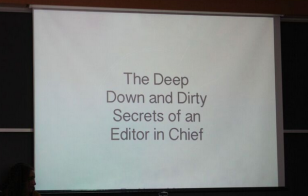 was met with questions, and this was reassuring as she made her way through them one by one.  You could see the difference in her confidence through the second and third workshop, so – yes. she did bring it home!  Her last two sessions on Trello was VERY thorough and allowed many in the audience to get down and dirty with the program and we began to help individuals with specific questions about Trello. 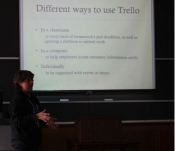 One of the best thing is seeing all the nervousness melt away when staffers come to the large attended workshop, as well as a small attended one, and don’t lose their nerve.  Such was the case here, if the next few days would be any indication of how well the rest of our workshops would go, then all nervousness would be stripped away.  Proud would be an underestimated reflecton of how well the first round of workshops went on a CSPA workshop day.

Following our last session and congratulating Alexa on an exhausting, yet productive and successful schedule of presenting, and finding out in fact we could NOT rearrange the cruise for another night (one strike out for making things gel with missing Phantom) – we headed back to the hostel ASAP – and needed to be on the docks of the Chelsea piers for 6:30 cruise on the Spirit of New York – we made crazy great time leaving, arriving, and with three blocks remaining, the skies opened – our old friend rain appeared again.  I wondered how we could have offended someone so often to have us pelted with rain so much, but we rushed forward – wet and drenched, and we just made it to board the Spirit of New York.

As we boarded I recognized the manager from two years ago and ne in turn recognized mine – we settled in (for once) to watch the rain from inside and not the outside experiencing it.  We were able to take in a great waitress, offered to visit the captain’s

quarters to ask a myriad of cool questions and catch the night and cruise in a whole different way.  From asking questions geared to what type of education was needed, to how someone not a captain obtained this job, (the assistant to the captain was from Dominican Republic area) – to the hardships, the best times of the season and more, the staff learned much from this seafaring staff!  We also were able to take in a great mix of music thanks to requests from Alexa and Valeria, also a mix of potatoes, chicken, and many more dishes of very good food, and some desserts brought out.  The views were phenomenal, and we just took in the views of Lady Liberty,

and I thought of how much turmoil our country was in right now and I said a silent prayer to have things right themselves.

Honestly, the cruise seemed to be over so fast – but I think it was just a reflection of how comfortable everyone was with each other and not having to run in the elements.   From our waitress, to the manager asking how all was, to the additional workers helping Alexa get those desperately needed band-aids for her blistered feet – by the end of the night, heading back – it was amazing to hold the pictures 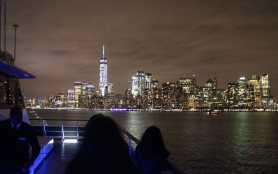 we had of New York at night in our minds.  That was the last thing I remembered as my head hit the pillow.