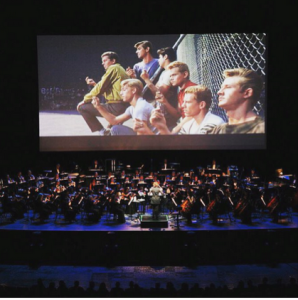 I realize now, many things I should have done, seen, or somewhere I should have been already – yet, often there seems to be a reason why the wait was so long.  For example, I have been in Mexico and never been to a beach in four years – why?  NO IDEA,  but I feel the reason will be that much stronger and clearer when it happens.   I have never, ever, seen West Side Story, ever.  Live or on video, Ever.  June 1st, I realized why.

You are well aware of when all odds are against you, correct?  Let me paint  brief picture – taking hours in a taxi when it would hopefully take minutes, hundreds of pesos versus single digits for a fare, sending packages that cost double instead of half, an obvious waste of money that sends you into frustration with the extra time you spend to earning it, running to the Auditorio Nacional with five minutes to spare, having the heavens dump every ounce of rain on you in the meantime, to find you had over 2o minutes to spare, this is all just for starters, sitting in the wrong section of the Auditorio to find a couple anxiously awaiting their seat, on and and one, sometimes the hits keep coming and seem to have no end.

With Alondra de la Parra directing Jerome Robbins and Authur Laurent’s West Side Story June 1st, and despite knowing I had purchased a pretty hefty ticket, I had no idea how all these events could and would be wiped away in one event that absorbed all the problems of the week, and just released them.  And yet it occurred.

The sheer depth and size of the Auditorio National is breathtaking enough, (you’re right, I have never been in there before) – but I can’t even begin to tell you how excited I was to see I was in the very front row – the stun factor took several minutes)-  Perhaps one of the best moments all evening was viewing the reel of West Side Story, the original, on the huge screen coordinated with Alondra de la Parra conducting the orchestra to match the movie seamlessly.  The silhouette of the strings seeped into the screen of West Side Story, and resembled a work of art in it’s view from where I sat.   The music just seemed to natually emanate from the video, only on such a more powerful scale, but then you feel, you literally FEEL the depth and volume of the orchestra, and amid it all, Alondra de la Parra throwing such energy into the direction the whole time, this whole night was magic and it was easy to get caught up in the emotions of recognition, depth of feeling, and beauty on the stage.

Seeing the originality of the choreography, the actors, (Natalie Wood!), the immediate reaction when I recognized songs that had come from Into the Woods and just other places, that I had no idea previously came from West Side Story? – I was so excited to locate the places I had heard these while at the same seeing them develop in front of me on screen and under Ms de la Parra’s direction.  I know in my heart of hearts, I would have never truly appreciated the beauty that I received had I viewed West Side Story before this on film – this was such a rapture of emotion and power captured in artists of the past and a director and orchestra of the present, I found little in words that could celebrate this feeling of talent on all fronts.

I loved – LOVED the fact that Alondra de la Parra does little characteristic-like additions all around to enhance the experience – hence – during intermission asking the audience to Tweet their favorite score up to that point in the production (I have to say mine was America), and at the end, Ms. de la Parra opened up the pit as a salsa dance floor and invited the audience to dance to their jazzed up salsa/synco beat piece that pumped right through your veins.  Leonard Bernstein was a genius, and to see his work in full force through Alondra de la Parra? – priceless.  Her energy and passion for her immediate direction was again flashed through everyone in the audience.

I was fortunate enough when Repentino.’s founder, Camila de la Parra, invited me to a dinner celebrating her graduation.  I had no idea the deep connections within her family of Mane de la Para and Alondra de la Parra, and yet, there we were, all dining, laughing, and talking under one roof.  I would never, and will never forget how amazingly talented, personable, and beautiful they were in the relationships of family, their experiences that revealed their joking nature, and the down to earth contributions they make from their hearts.  Seeing Alondra de la Parra on stage was a magic moment in connecting what I had witnessed previously in her person individually, and I appreciate the humbleness and the talents of this family Camila always maintained but never bragging, each member letting their talents speak for themselves. Walking away after midnight on this July 1st production of West Side Story, I had not only witnessed a first for myself, but realized how many first’s I have yet to experience in the beauty I have come to know as Mexico.  I am not sure anything else could ever be wanted in life!