“I like to call them our tributes…”.  A dunk tank.   A bear suit.  It’s funny how specific situations can call up connections to various OTHER connections.  Anytime I hear the word tributes, I think of Hunger Games.  Today, however, (yesterday), I am sitting in a dunk tank, I am the ASF Bear, and I see “Tributes” in front of me, teachers from the Middle School, as we begin our Great Race to earn funding for scholarships at ASF.  The dunk tank?  What happens when certain amounts are raised, teachers will be “sacrificed” for the sake of others as we rise up the chart 🙂

This whole week was the ASF bear tour! – we started in Lower School, then ECC, today the Middle School presentation at the FAC, and later today the US.  Through it all, you may or may not agree with the idea of tributes, but if you think about it, it is more than that.  The individuals from ASF have a potential to take scholarships and give something back to Mexico and the community around them.  This is powerful.  We as supporters of a fund need to grow those ideas in individuals that are students, whether scholarship or not, not only encouraging students to make a difference in the world before they leave ASF, but to realize the resources in front of them allow themselves to change themselves but also, to make an impact, a ripple, that can be felt far beyond the walls of ASF.  This is a great motivating factor that lifts me up beyond the list of things to do, the papers that pile up waiting to be examined, and beyond the Monday to Friday calendar week.

It is very easy to not see past the week, and this week seemed to wipe me out but, each time I thought about it, actually took time to think about it, I became clearer.  The moments we have to reflect on what fundraising means, and what it COULD mean, in actuality we ARE paying tribute to something that can in fact change the world and be a positive when alot of negatives are floating around.  I think the potential to be a “tribute” and paying tribute to how we can make a difference, is so much more than the road to get there, and it is vital to use every moment you haver to insure, if we want a better world around us, we pass on a little part of the need and want to others around us.

This sounds a little far-fetched  starting with a bear suit, dunk tank, and presentation about raising the opportunities for our own scholarship, but if you truly think about it, it DOES make sense, it DOES have the potential to be a starting point of change to push others forward and enable them to take an opportunity, and make more opportunities in the world that others might not even be aware of, and can pass that torch of change onto others.  Being positive is very difficult at times when there are so many concerns and possibilities for hurt but there are so many channels that reveal themselves as possibilities if you are patient. 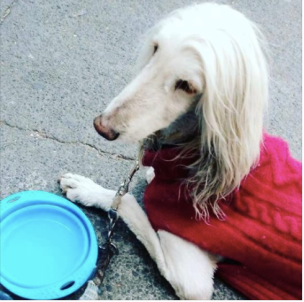 One case example, but there are more.  The one most painful thing has been losing one my the biggest parts of my life- losing Kinah.  On August 10th, we found one of the softest, tenderest, most lost canines ever and eventually she would become known as Kinah.  On the worst of days, Valentine’s Day, due to complications that I failed to find, I lost Kinah and not only me, but many lost Kinah.  As I write this I am having problems finding the words – as I have struggled with this the last few weeks in very difficult ways. However, Friday, February 25th, 2017, something special happened.  In an event called “Kibblethon” on our campus, I was graciously allowed to have Andres, from Walking Dog, bring Kinah’s puppies, Amaya and Wriggley, as well as Dane, to ASF as a demonstration to let people see what is possible when you takin in strays.  This was to promote shelters and the adoption of dogs and cats, as well as supporting the shelter who came to ASF.  It meant something to stand back and see hundreds of people surrounding Kinah’s family – and in the spot where Kinah herself had been found. Some that remember Kinah do remember the story of her puppies, but I am not quite sure I can bring myself to the point of going deeper into this subject with how painful it is. Sometimes it is enough to touch the surface of an event, but seeing everyone pay tribute the cause of helping animals, and having Kinah be a part of that, as well as that stemming back to what my father believed in, and being surrounded  by people that were truly supportive and just amazing, this might have been the best tribute anyone could have asked for.

Finally ASF Talks. Wow,  What a production and lasting all night. I have to admit I had never been to one before however, there was something magical beyond the late night and the long day put in.  Seeing the students that also had spent all day and all night at ASF, mingle and learn new techniques of videoing, interviewing, and more, some of the most unsung heroes were the students that made up the Media group.  From rushing back and forth, interviewing, recording, filming, videoing, and more – they were inspired and paying tribute to an event that brought people together in many ways. The alumni, speaking with them as some strolled into the library and reminiscing, seeing current students as well as alumni share visions of possibility, while all was a haze, there was this gift given of tribute back and forth.  It was a week of exhaustion for sure, but on the other end of the spectrum, redefining how the word tribute plays a role in so many ways if you let it.  Sometimes if leads you past valleys of hurt and pain to get to, yet, you find not until later down the road, that journey is worth it if you keep the faith.  It does your heart good – trust me.