Coming across a graphic novel by A.J . Dungo titled, In Waves, I couldn’t help but jump back into the turn of events that have consumed so many in the past few months. If you have never come across the brilliant Tom Blake, you need to definitely check him out, as he was a brilliant mind often just attributed to surfing but he represented so much more.

In my last post, I recounted the inspirational privilege to hear Australian authors, some representing Australia’s first Indigenous graphic novelist. and accounts of a country often misportrayed through historical writing, I was relieved to find that some of the best topics are often not publicized as other topics.

On August 31st, after that first panel on International looks at Australia, and moving into the panel involving Scott Westerfeld – I was quite interested in seeing Mr. Westerfeld again but as a spectator.  Previously, in April 25, 2015, as an advisor of Repentino. and an event known as Authors Among US, we were lucky enough to have Mr. Westerfeld visit our school and have a very interesting talk.  On August 31st, Scott Westerfeld was just as inspirational and comical in looking at the developments that can change graphics and illustrations tied to the art of novel writing.  Hos workshops was a great reunion with someone who had made a huge impact on me and reminded me of where I had come from in Mexico.

As we traveled out of this workshop, one of the most historical events of the day was occurring.  U.S. Supreme Court Justice Ruth Bader Ginsburg was present and conducting her interview. We stopped and watched her on the running video as well, and I have to say, she is easily one of the most inspirational individuals we have known in history today.  From fragile struggles in the face of staggering obstacles, she is easily a voice of hope in the middle of so many dark events. She is a triumph.  I recalled individuals on social media truly depicting U.S. Supreme Court Justice Ruth Bader in a negative light, based on her age, and yet, this shows those that are intimidated by the power of woman, and a woman no less that continues to resist giving in to a world of selfishness, vanity, and not being able to be a leader and conforming to be a follower. There is not doubt she is an inspiration on countless levels.

This only is the second segment of the amazing aspects that the Library of Congress brought out, and yet as I return to a blog post that is long overdue, one main thought still sits with me.

With some major heartbreaking losses that words are not able to express right now, the importance of resisting the consciousness of the clock, not devoting one to a devotion of the dollar but of reserving time to take life, both good and bad, and be able to reflect on it, life is the best lived. There are so many stages of opposition to do this coming back to the states from outside the United States, and one does not realize it until they see a society that values those moments more than the dollar.

There are people you will be lucky enough to come into contact with that will remind you to never take a day for granted and to remind you what happens when you do this.  Life opens up, becomes less hour to hour to be somewhere, and you learn alot of what makes life really meaningful. 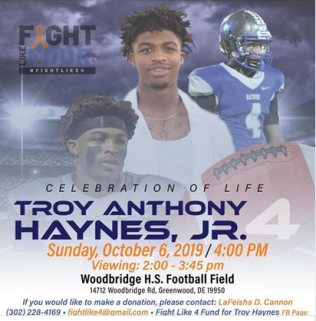 Attending the Woodbridge football game on October 4th, it was amazing to see hundreds upon hundreds of individuals honoring Troy Haynes and the inspiration he passed on every day to others.  Troy no doubt represents what each of us have a choice to do every day, and take life to the fullest, and making sure taking the steps taken will allow time to take in what potential life has for all of us, allow us to fight for the best things in life many take for granted.